The Long Road to “Sworn to Remember” 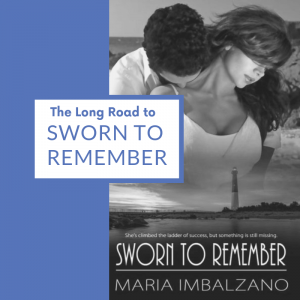 “Sworn to Remember” is being released tomorrow, May 15, 2019, which is about 16 years from when I first wrote a version of this book. Back then, it was titled “Weekend Diaries” and in 2003 it won the NJ Romance Writers Put Your Heart In a Book Contest. As a result, I signed with an agent and thought this book would launch my career as a romance novelist.

Unfortunately, it did not. My dream faded with each rejection and I moved on to write another manuscript and another. It wasn’t until 2013 that I signed my first contract with The Wild Rose Press and it was for the fifth manuscript that I wrote, entitled “Unchained Memories.” I went on to have “Dancing in the Sand” published, but I could never let go of “Weekend Diaries,” Samantha’s story.  So I went back, took it apart, turned it into a four-book series, and gave each of Sam’s girlfriends their own story. Oddly, book one of The Sworn Sisters Series wasn’t Sam’s story, but Nicki’s. After waiting for over 16 years, Sam still had to wait!

Until now. So with breath held and fingers crossed, Sam’s story is entering the world in a few hours. Maybe 16 years is the charm.

2 thoughts on “The Long Road to “Sworn to Remember””