The Inspiration for My Hero in “A Song For Another Day” 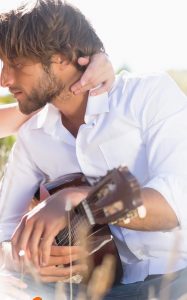 I love to listen to music and sing along, which I do while I’m walking, making dinner, or driving. Over the past eight years, I developed a love of country music and listen to it on The Highway (Sirius Radio), Alexa’s choices on The Echo, or my IPod (yes, I still have one!).

Country songs have stories (other then about drinking), and many times they stick in my mind and I create the larger story around the characters.

One of my favorite country bands is Old Dominion (“Break Up With Him,” “Written In The Sand,” “Hotel Key,” “Snapback,” “Song for Another Time,” (the inspiration for the title of my book) and “Some People Do.”)  Not only do Matt Ramsey, Trevor Rosen and Brad Tursi, members of the band, write songs for their own group, but they, along with others,  have written songs for The Band Perry (“Chainsaw”) , Luke Bryan (“Goodbye Girl”), Dierks Bentley (“Break Up With Him”), Sam Hunt (“Ex to See” and “Make You Miss Me”), Kenny Chesney “Save It For A Rainy Day”) and many more country artists.

I’m so inspired by these song writers that I used them to create my hero, Jason Simmons, in “A Song for Another Day.”  While Jason is not a member of a chart-topping band, he is a very talented song writer and performs his songs, as well as covers, at the local bar, Finnigan’s. He knows that living in a small town in Vermont will never get him where he wants to be – which is writing songs for country bands in Nashville and maybe even recording his own songs—as long as he doesn’t have to perform them before a live audience.

“A Song For Another Day” releases on October 21, 2020 and is available at amazon, b&n, Kobo, Apple Books, and Google Play.