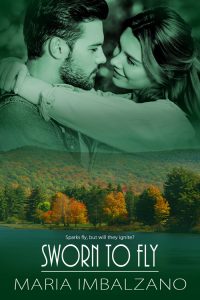 Today is June 7th and my seventh book, Sworn to Fly (a contemporary romance/women’s fiction) has been released. I’m hoping seven is my lucky number.  It is my fervent wish that my readers love Alyssa’s and Gabe’s story as much as I loved writing it. A little about the story in a minute. First, I did some research on why the number seven is considered lucky. Here’s what I found.

Maybe that last one is a bit of a stretch as to why people consider the number seven lucky, but who doesn’t like the fantasy of seven men taking care of you? Especially if they are taller, built better, and a little more handsome than the Seven Dwarfs.

Which brings me to Sworn to Fly (where there is only one tall, toned, and handsome man). The story takes place at a resort in the Poconos where Alyssa, a true homebody, books a week vacation to get away from her job, her mistakes, and her life. It’s not the resort she’d anticipated, hoping for some rest and relaxation. Instead, it’s more of a boot camp where she’ll be hiking, mountain biking, kayaking and rock climbing. She should have done her research, but she was in a tailspin over the possibility of losing her job and a hasty retreat seemed her best bet.

While there, she meets Gabe, a world-travelling photographer who has his own reasons for escaping for a week or two. Their chemistry is combustible, but will Alyssa and Gabe’s divergent worlds ever mesh despite their collision on the mountain trail?

This book is the third book in the Sworn Sisters Series, but can be read as a stand-alone. The series is about four high school girlfriends, now in their early thirties, who are each going through a life-changing event in their own story. Sworn to Forget is Nicki’s story, Sworn to Remember is Samantha’s story, and Sworn to Fly is Alyssa’s story.

All are available in print or as an ebook. See the buy links on this website.