Coming Soon…. “A Song For Another Day” 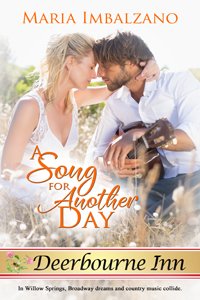 I loved writing “The Blueberry Swirl Waltz,” my first novella ever. While it’s difficult to get an entire story arc into 100 pages, once done in draft, it’s much easier to edit than a 300 page novel. Since I edit my work to death, with a novella I’m able to get through each round much quicker and therefore, get my book published faster. While not instant gratification, it’s speedier than the year it takes me to write and edit a novel.

So after having written “The Blueberry Swirl Waltz,” I looked into The Deerbourne Inn Series, published by the Wild Rose Press (my publisher), and decided to write a novella for that series.  After the initial approval of my idea by the editors in charge of this series, I got to work.  I studied the series bible that lays out all the characters who live in the town of Willow Springs, Vt., along with a list of all the stores, restaurants, bars, services and other buildings, complete with a map of the streets placing these businesses where they belong. There was a description of the geography of the town–how to get there by car, bus, train or plane–and the history of The Deerbourne Inn. This information all had to be woven into my book so it wouldn’t clash with other books written in the series.

One of the rules of writing for the series was that the author had to choose a character who lived in Willow Springs as one of the main characters. The other main character could be visiting if you didn’t want both characters coming from the town. And of course, The Deerbourne Inn had to be front as center, almost a character unto itself.

I chose Jason Simmons as my hero. He lived in Willow Springs and was a part-time shuttle driver for the Inn. He also played guitar and sang at Finnigan’s, a local bar, on weekends. In developing him further, I had him be a songwriter, trying to break into Nashville, as well as a model–since he is extremely handsome and needed a way to make money. The heroine of the story is Giselle (Gigi) Jenson, an aspiring Broadway singer/dancer, who is waiting to hear about her audition for the touring company of CATS. She takes a six-week job in Willow Springs as the director of their Community Revue, and lives at the Deerbourne Inn while she’s in town.

Here is the back-cover copy for the book:

Gigi Jenson, an up-and-coming Broadway star, finds herself in Willow Springs, Vermont, for the summer as director of their first annual community revue. This sleepy town is worlds away from her vibrant and beloved New York City, but the experience she’ll gain will be invaluable to her career.

Jason Simmons has lived in Willow Springs his entire life. Working several jobs while writing music, he yearns for a contract to record his songs. The one chance he had to make it in Nashville he blew due to stage fright.

When Jason volunteers to help Gigi with the revue, sparks ignite but their dreams are taking them in different directions. Will their love for each other ever guide them to the same path?

I just received the cover for this book–“A Song for Another Day”– and I love it!!!!  I hope you’ll enjoy reading this story as much as I enjoyed writing it. Stay tuned for the release date.