A Song for Another Day 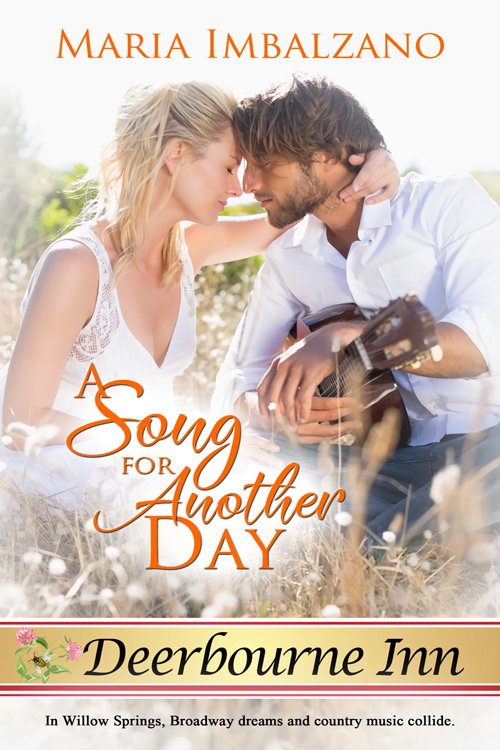 A Song for Another Day, Novella

Gigi Jenson, an up-and-coming Broadway star, finds herself in Willow Springs, Vermont, for the summer as director of their first annual community revue. This sleepy town is worlds away from her vibrant and beloved New York City, but the experience she’ll gain will be invaluable to her career.

Jason Simmons has lived in Willow Springs his entire life. Working several jobs while writing music, he yearns for a contract to record his songs. The one chance he had to make it in Nashville he blew due to stage fright.

When Jason volunteers to help Gigi with the revue, sparks ignite but their dreams are taking them in different directions. Will their love for each other ever guide them to the same path?

Excerpt from "A Song for Another Day"

“What am I doing here?” Gigi inhaled a purifying breath as she stood in front of the Willow Springs train depot along with three other poor souls who had disembarked with her. A clear sign that this little haven in Vermont was worlds apart from her New York City roots. If she’d been at Penn Station, no less than several thousand would be hustling around her on a Saturday evening, heading to the theater or a restaurant or a symphony. Or the Hamptons. This did not bode well for her irrational hope that her destination in the Mad River Valley would be a happening spot. Its name should have given her a clue.

Perhaps the angst gathering in her gut had to do with the job she’d accepted here more than the town’s sedate, provincial appearance. Although a six-week stint directing a community revue should be a piece of cake, and no reason to cause the merest bit of worry. After all, she wasn’t awaiting her turn to audition for a part in a Broadway musical, the usual culprit for this feeling.

New experiences always came with a certain amount of trepidation. The worry would disappear once she settled in. She just needed to ride it out.

The sun peeked through bluish-gray cloud sheets as if hiding behind misty glass. Puddles of rainwater patterned the parking lot, and a cool breeze ruffled their surfaces and elicited goosebumps on her sleeveless arms. Her white-sandaled toes tapped a staccato beat against the water-logged sidewalk. Manhattanites were an impatient bunch, and she had learned from an early age to get where she had to go by the fastest route possible. Unfortunately, the train had gotten in a few minutes early, and the Deerbourne Inn shuttle wasn’t scheduled to arrive for another seven minutes. Waiting was not her forte.

As she untied her white silk sweater from around her neck to slip it on, an old black pickup truck barreled into the lot and flew past her, spewing mud and water all over her creamy white pants. She jumped back, letting a curse escape as her heel caught between the brick pavers. Wrestling with her shoe, she tugged harder and her foot escaped, landing in a dirt-filled puddle. Nice.

Eye daggers met their mark on the back of the pickup, which had stopped at the far end of the depot. She was about to march the distance—one shoe on, one shoe off—to give the driver a piece of her New York City sass when a white van eased to a stop in front of her. A guy in his mid-twenties with longish hair, faded jeans, and a black T-shirt emerged from the driver’s side, stopping her from her mission.

“Are you Giselle Jensen?”

Gigi gritted her teeth to rein in her ire as she bent over to yank the leather spike of her heel out of its prison. “That would be me.”

His forehead furrowed. “I’m Jason Simmons. From the Deerbourne Inn. Why are you holding your shoe as if you’re about to fling it at me? I’m not late, am I?”

“No, you’re on time. I had to jump back when that black pickup came in for a crash landing, and my heel got caught in the pavers.” She inspected her ruined designer shoe, the leather pushed up like an accordion. “Great. Now I won’t be able to wear these unless I can find a shoe repair shop in the area.”

“Sorry to hear that.” His tone didn’t quite convey the required regret, but this heel disaster wasn’t his fault. He probably thought her reaction was a bit over the top for a strappy sandal.

She bent down and slipped on her wounded shoe, feeling the heat of chocolate brown eyes wandering across her body as she stood.

“Did you notice that he decorated your pants too?”

Not the words she expected after being raked over with such intensity. Although, really. He was a stranger. A very handsome stranger with flashing mocha eyes and shaggy brown hair that had the easy look of being finger-combed.

She looked down at her once-white silk pants, now dotted with various shades of mud. “Yes. It’s hard not to notice.”

“Nate Harte, the owner of the inn, will send them to the dry cleaners for you.” Looking past her to her luggage, he cocked an eyebrow, then walked over to her three-piece matching set and lifted the largest bag. “How long are you staying? Most people come for a week, but by the looks of it, you’re moving in.”

His grin produced a dimple in his left cheek, nudging her annoyance over splattered pants and a damaged shoe to the back burner as a tingling heat singed her cheeks. “Six weeks.”

“People dress pretty casually around here. I don’t know what you have in all these suitcases, but my guess is you won’t need most of it.”

If he were proof of the dress code, she would have to do some shopping. His well-worn jeans fit his butt and thighs perfectly—not that she was looking—and his black T-shirt rippled over defined abs. His shoe choice, cowboy boots, seemed a bit much for mid-June, but the weather today was on the cooler side.

“Thanks for the packing tip, but too late.”